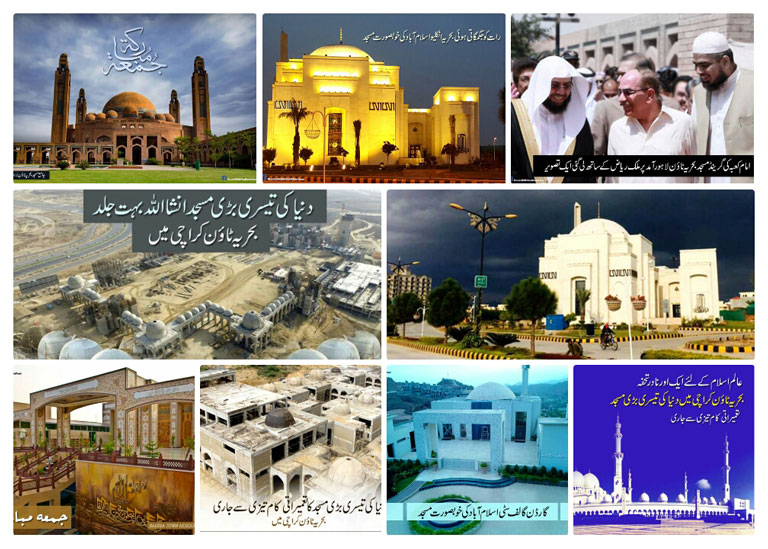 The best of places is a mosque and the act of building a mosque is the most blessed and virtuous of all acts. It is a highly commendable way to thank Allah Almighty for His tremendous blessings and to earn eternal rewards of the hereafter. Prophet Mohammad S.A.W said “Whosoever builds a mosque for Allah, Allah will build for him likewise in Paradise (Sahih Bukhari)” and in another narration  it is stated “The most beloved of places to Allah is the mosque and the most detested of places is the market place (Sahih Muslim)”

Malik Riaz Asia’s largest real estate developer, chairman Bahria Town is always eager to express his gratitude towards his Creator, who has bestowed upon him plentiful favors. All his social and welfare work reflect his strong desire to please Allah the Exalted and to do justice with the immense blessings that has been granted to him. It is this quest to seek the countenance of God that has made him construct great mosques all over the country.

Grand mosque in Lahore which is the largest mosque in Pakistan and the seventh largest mosque in the world is built under the banner of Bahria Town. This mosque is a rare piece of beauty and its architecture is a spectacular fusion of culture and religion. It is built in a short span of four years with a huge amount of 4 Billion rupees. It can accommodate about 95000 worshippers and has a separate praying area for women. The mosque is decorated lavishly with exquisite carpets from Turkey and magnificent chandeliers from Iran. Moreover it has an Islamic art gallery and a school of its own to promote the love for knowledge and learning.

Another such grand mosque, which will be the largest mosque in the world, after haram of Makkah and Medina, is under construction in Karachi. This mosque shall have a capacity of 8 Million people. It will be furnished with the world’s best material equipment, advanced thermal power system, latest air conditioning system and  modern water purification plant. Further it will also have an Islamic center, Islamic museum and higher Islamic education center. International debate conferences shall be hosted by this grand mosque. Malik Riaz is determined to complete the construction process of this extravagant mosque in record time.

Apart from these mega mosques projects, each residential sector of Bahria community is provisioned with a mosque of its own. Additionally these societies have Jamia mosques for large congregations for the occasions of Ramadhan , Eid etc. These mosques are exceptionally spacious and have unique structures which stand witness to Malik Riaz’s  passion to please God and to serve His religion.